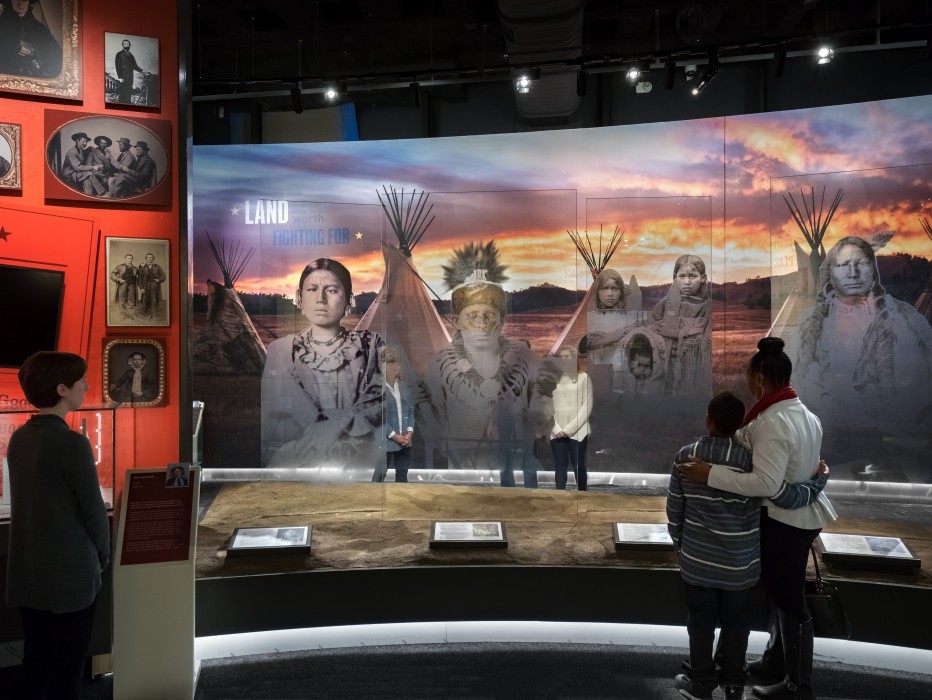 The Great Plains was home to many tribes, representing many different cultural groups.  During the 1840s and 1850s, although few whites chose to settle in the region, their overland passage caused serious disruptions in the lives of the plains people. Suddenly, sparsely-settled areas of prairie land were filled with thousands of emigrants in covered wagons.

Despite hardships, many Indians were helpful to the emigrants, and were interested in trade. Indians ran ferries and offered food and shelter, sometimes for a price, other times for free. Indians often wanted emigrant livestock and were willing to trade for them. They also sought clothing, firearms, and small items such as mirrors, tin cups, fish hooks, and metal tools.

Trails Cut a Swath Across the Prairie

Indians of the Great Plains noted the destruction caused by the overland emigrants passing across their lands. The natural migrations of the buffalo herds, on which they depended for nearly every necessity of life, were disrupted. Animals, draft oxen, milk cows, and horses brought by thousands of overland emigrants ate all the grass in a band several miles wide.

The emigrants cut the trees along the streams and slaughtered buffalo for food and sport. They threw their refuse along the trail, including furniture, stoves and other items too heavy to carry in the wagons. Oxen starved when the grass was gone, and died by the trail, their bodies rotting in the hot sun. Some of the wagons became useless without draft animals, and these were left behind as well.

Although Western movies later exaggerated the number and frequency of attacks by Indians on wagon trains, frustration sometimes led to conflict. Indian attacks increased in direct relation to their destitution and despair. Most violence and deaths were due to small skirmishes sparked by fear, retaliation or theft.

Overlanders began their journey in great (and needless) fear of Indians. They sometimes took potshots at Indians along the trail.  It should be noted that more Indians were killed by overlanders during this period than were pioneers by Indians. A study by historian John D. Unruh estimated that a total of 362 overlanders and 426 Indians were killed as a result of altercations on the trail between 1840 and 1860.