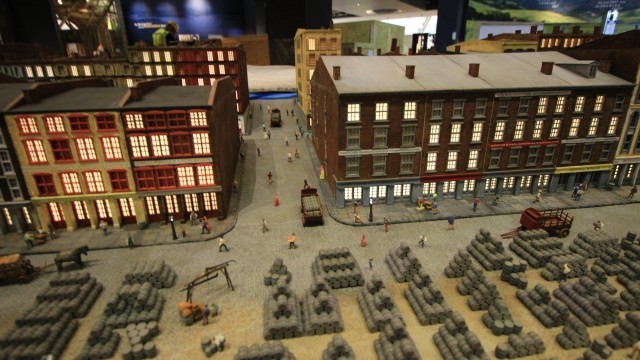 The St. Louis levee bustled with intense daily activity during the 1840s and 1850s. It was the heart of the city during the Riverfront Era with hundreds of boats moored there each year, facilitating and fueling westward expansion. St. Louis was the great distribution point for commercial goods in the American West. The Port of St. Louis was a transfer hub for goods on the inland waterways. Different types of boats were needed to navigate the rivers as they radiated away from the city. So a boat used on the upper Mississippi was not the same type used on the lower river or on the Missouri. Because cargo and passengers had to be shifted from one boat to another, St. Louis was always busy.

In 1817, the first steamboat to arrive in St. Louis, the Zebulon M. Pike, changed the city forever, enabling it to become a crossroads of trade and commerce. Steamboats could transport goods between New Orleans and St. Louis in ten to twelve days, rather than the five to six months it took using keelboats or barges. Steamboats made the Missouri River a more efficient gateway to the West. The city made thousands of dollars each year through fees charged at the port. Piles of goods stacked on the levee included large cargoes of iron, lead, buffalo robes, furs and pelts, barrels of tobacco, bales of hemp and cotton, and sacks of grain. The Port of St. Louis was important as a Midwest distribution point for goods from other parts of the United States and for international imports.